This is a very rare and stunning Iatmul Substitute Ancestor Skull from the Iatmul region, Middle Sepik, Papua New Guinea collected by a patrol officer in the area. A striking aspect of art in several New Guinea societies is the combination of art and the human skull. In some areas, figures occur that consist of a human skull placed on a wooden representation of the body i.e. the Korwar skull in the Geelvink Bay area. In the Iatmul area, an ancestor skull is mounted on a spike cut out between the shoulders of a human figure, either free standing or forming part of a suspension hook. Sometime the skulls themselves becomes works of art when richly adorned with feather headdresses, shells, and seeds (Asmat), or by over modelling and having facial designs painted on them and a wig attached made of human hair (Iatmul). In some cases the art is combined with enemy skulls or skull trophies, in others with skulls of revered ancestors. Among the Iatmul, over modelled skulls may be mounted on bamboo or wooden spikes of meters-long “skull racks”, which are hung in the interior of the ceremonial men’s houses. Remodelled skulls, probably those of enemies, are also placed in niches high up in the facades of a ceremonial house, usually in a grouping of four. Ancestral skulls are used in certain ceremonies. During mortuary rites, the over modelled skull of the deceased is placed in front of two splendidly decorated life size puppets whose heads are similar skulls, as if the dead person is ceremoniously being collected by ancestors or mythical figures who will accompany him to the realm of the dead. These skulls are also used certain ceremonies. During the mbatnggowi ritual (probably a fertility rite), basketry figures, each with a skull for a head, are manipulated by bamboo sticks above a screen in order to show them clearly to the women. A skull may also be used as the head of an enormous moving stage, representing a mythical creator, pulled round the village by an initiation group, or of a structure representing the pottery goddess of Aibom.

Both the skulls of enemies dispatched in the past and those of one’s own dead are over modelled by covering them with a layer of clay mixed with burnt lime and the oil from a tree bark or juice of the breadfruit and a thick layer of wax. The skulls dusplay curvilinear facial painting typical of the Iatmul which is similarly applied to masks, the faces of carved human figures, and other items, In particular, the skulls of outstanding members of society or of people distinguished by exceptional beauty (for example, the possessor of a long nose) are modelled. This accords with facial painting for both men and women on ceremonial occasions; people identify themselves in this way with mythical beings of ancestors. The designs include many variations, perhaps each one personal to an individual. The actual hair of the deceased, smeared soot and tree sap, is fixed to the top of the skull. The eyes of the remodelled skulls are often inlaid with cowrie or Conus shells, and sometimes mother of pearl. The outer edge of the face and forehead may also be inlaid with shells, and occasionally Coix seeds. In a few cases the cheeks and eyebrows also have shell inlays. All in all, an attempt is made to produce a close likeness as possible to the dead person.

This is a rare and unique one of a kind mask and would be a wonderful addition to your collection. The estimated age of the piece is between 1950’s to 1960’s.This is a stunning collectors piece.

** Where possible I am happy to combine postage if I can make it cheaper for you. This is not always possible given the sizes and unique packing requirements for each unique piece. Can also insure package if required. Any import duties, customs and taxes are the buyers responsibility** 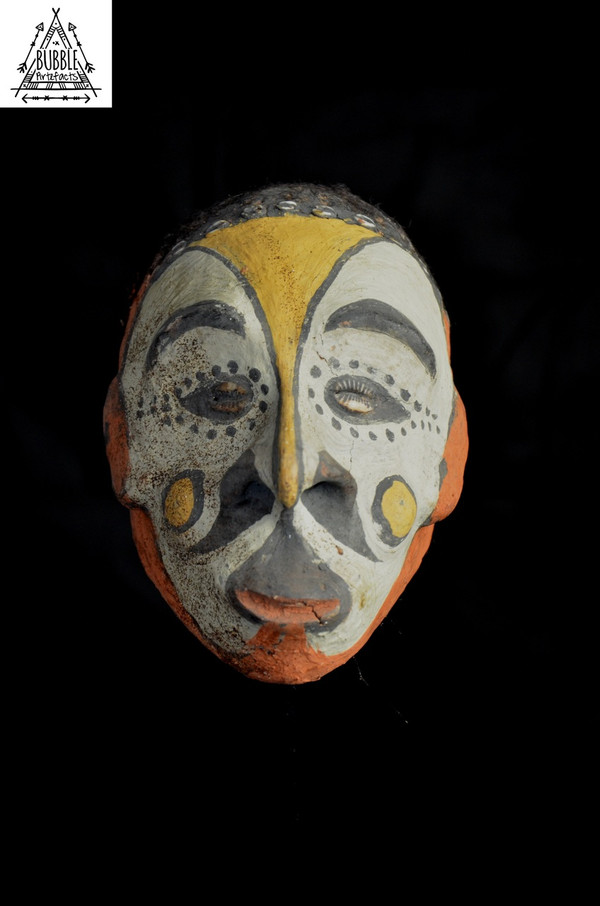 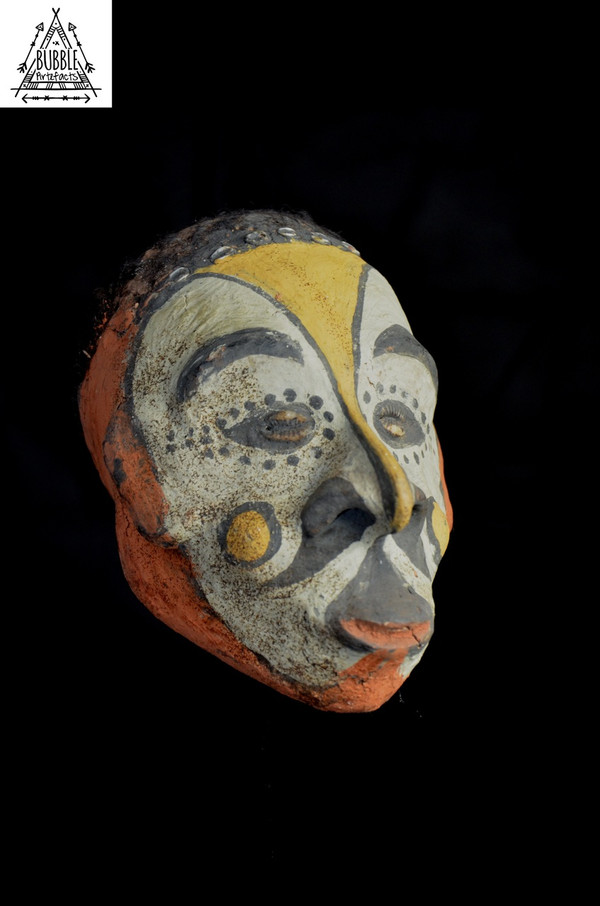 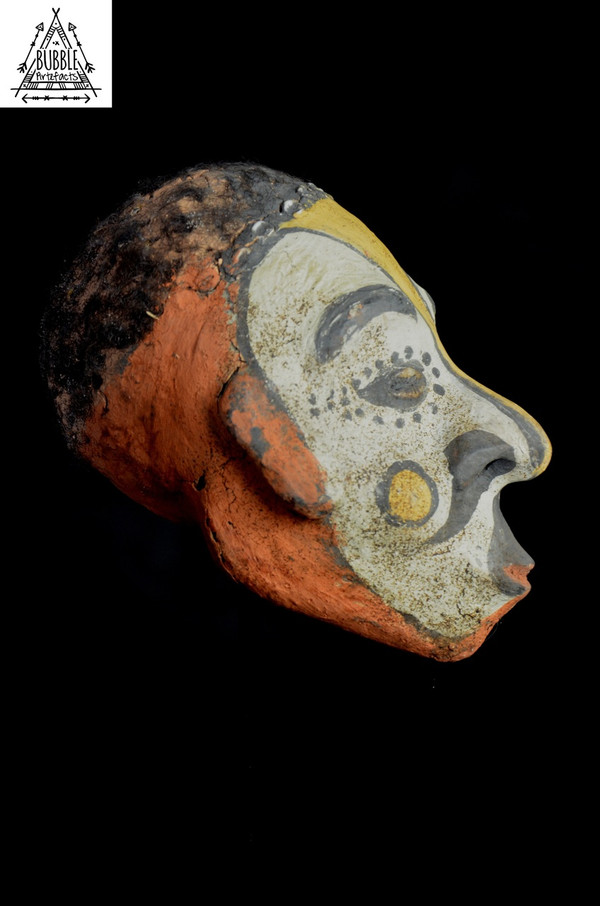 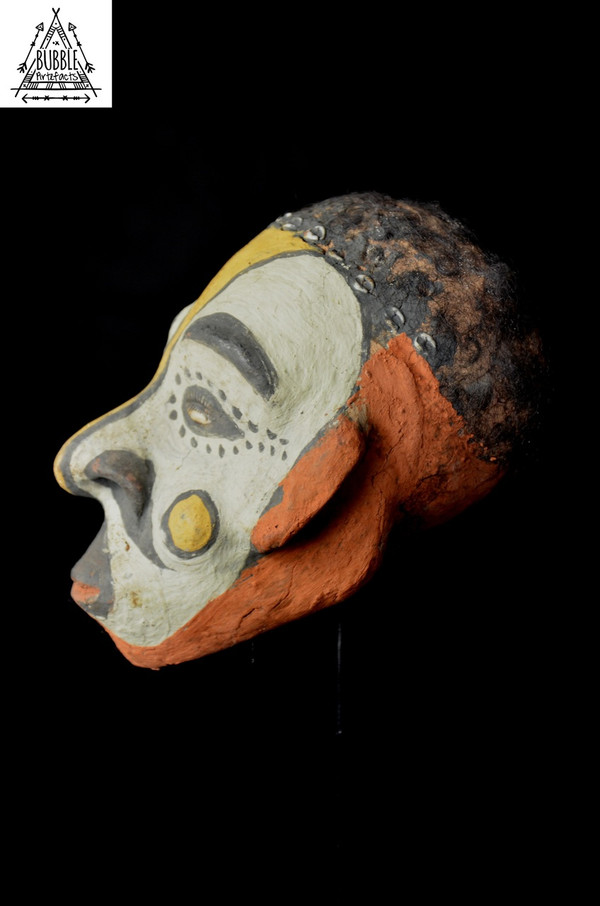 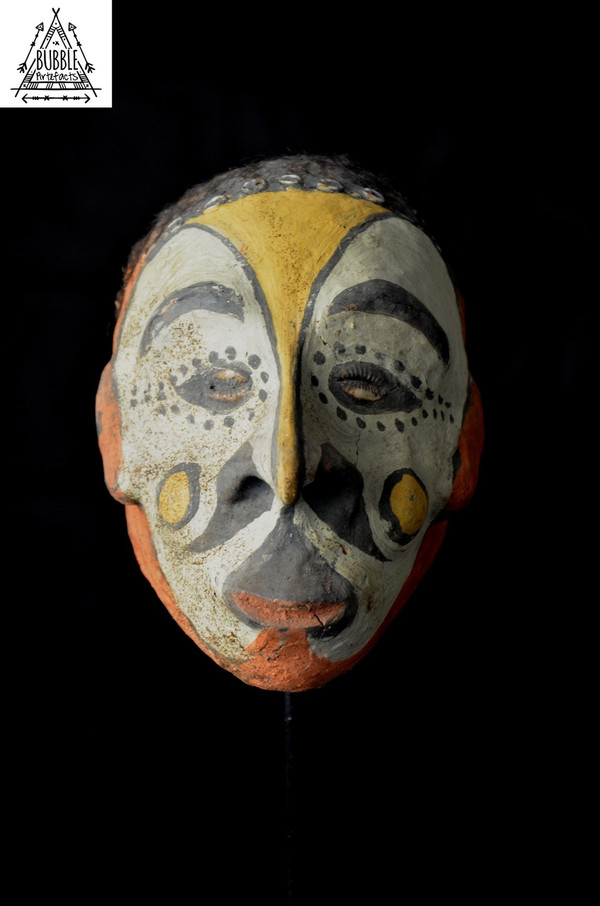 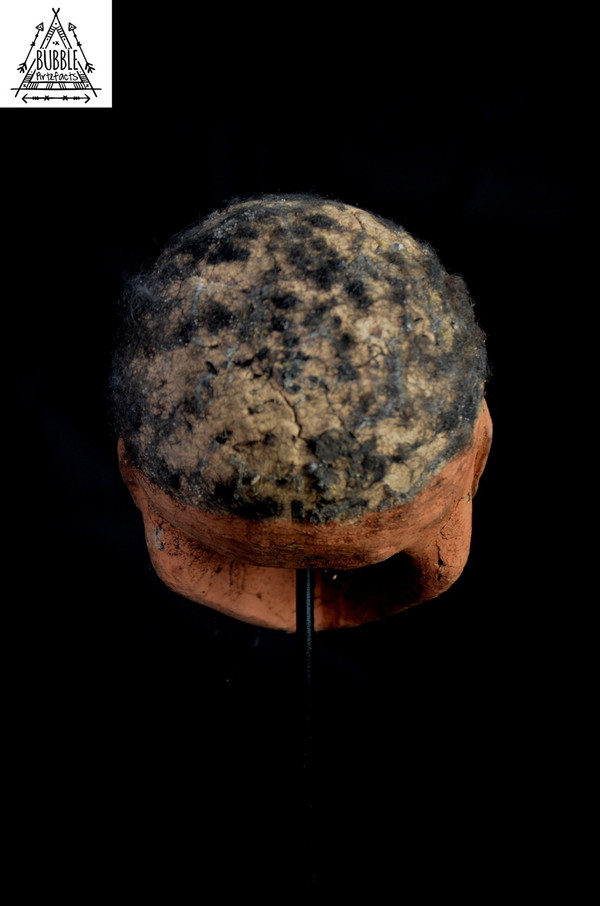