Part of an African Collection by M. Reeves, Australia. Field collected whilst living in Africa for 20 years and part of a beautiful collection amassed over this period which was brought back to Australia in 1980.­ Stunning old collectors piece, this is a vintage very rare Yohure mask from the Côte d’Ivoire, Africa. Hand carved (adzed) from a single piece of wood with color pigment. Usage traces and drying cracks. Beautiful patina.

This is a Very Rare Beautiful Hand Carved Wood and Painted Yohure Mask from the Côte d’Ivoire. The Yohure masks are considered emblems of yu spirits, very dangerous; they have to be handled with extreme caution. Cases of death that jeopardize the social order are the principal occasions for an appearance of masqueraders. By means of their dance, they restore the social equilibrium of the community and accompany the deceased into the ancestral realm. These masks are worn predominantly on two occasions: the je celebration and the lo funeral ceremony. The first purifies the village after a death and helps the deceased's soul on its way to a final resting place. Women may not participate in funeral ceremonies, neither may they look at the masks, for fear that this encounter with death might jeopardize their fecundity. This means that before starting the village’s purification rituals related to a death, for prudence sake the women are gotten out of the way. With the aid of such masks, the people hope to influence supernatural powers, or yu spirits, that can do harm to humans, but that can also ensure their welfare. Painted masks are mainly worn by dancers during this ceremony, while for lo funeral ceremony, masks covered with black pigments appear. The function of each type of mask is not rigidly fixed, which leads to their appearance during either ceremony.

The 20,000 Yohure inhabit the central region of the Côte d’Ivoire, the territory between the White and Red Bandama Rivers, to the east of the city of Bouafle. The Yohure are geographically and linguistically situated between the Baule, an Akan language group to the east, and the Guro and Gban (Gagu), southern Mande-speaking peoples to the west. Depending upon their proximity to their neighbors, the inhabitants of Yohure villages are either entirely Baule or Mande speaking. Villages are generally associated with one clan. They are governed by a leader assisted by a council of elders who represent each family holding. Each family lineage traces his roots to a particular ancestor. Not only their language, but also the culture, religion and art are influenced by their powerful neighbors, the Baule and Guro. The Yohure possess a strong sense of identity and have evolved a refined art. The Yohure decorate different everyday objects with figurative representations, but first of all their beautiful masks reveal their artistic abilities.

The masks of the Yohure represent human faces often supplemented by animal attributes. They have an elongated face with a protruding mouth and pierced semi-circular eyes set under a high forehead. An elaborate plaited coiffure parted on each side, often with horns at the end, completes the image, while the outline of the mask is characteristically surrounded by a serrated edge.

Small Yohure statuettes are carved to protect and help in difficult situations. They have realistic features with the emphasis placed on the head. The Yohure use drums to announce the death of a chief. 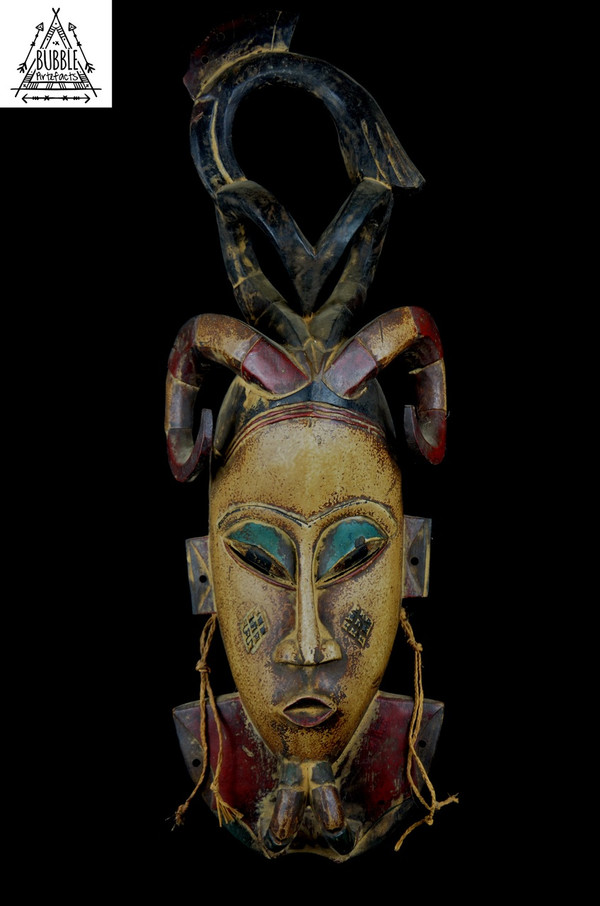 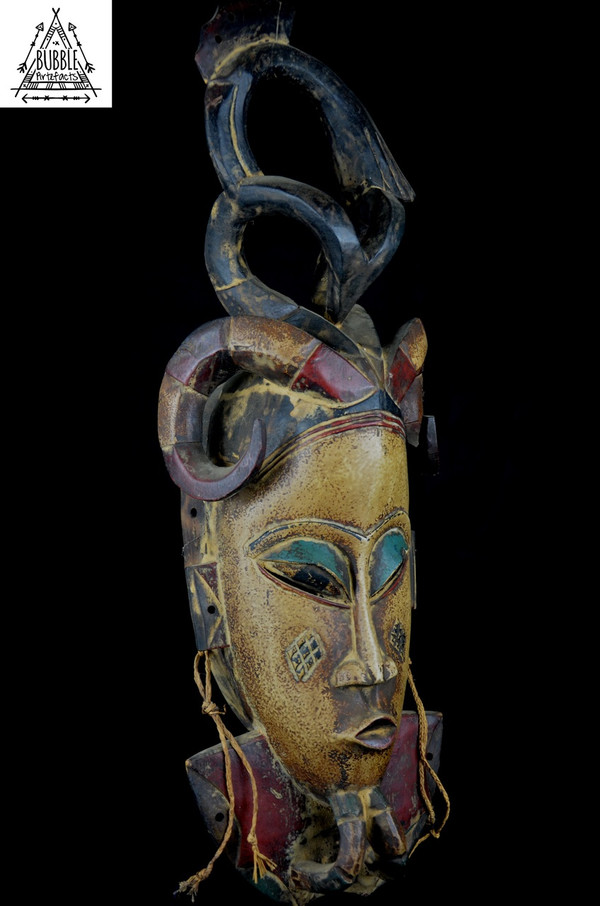 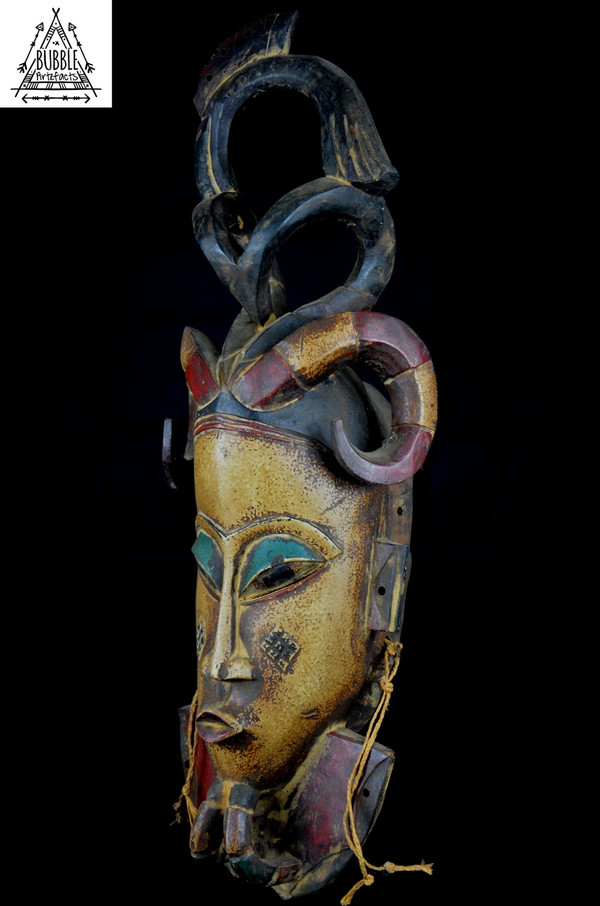 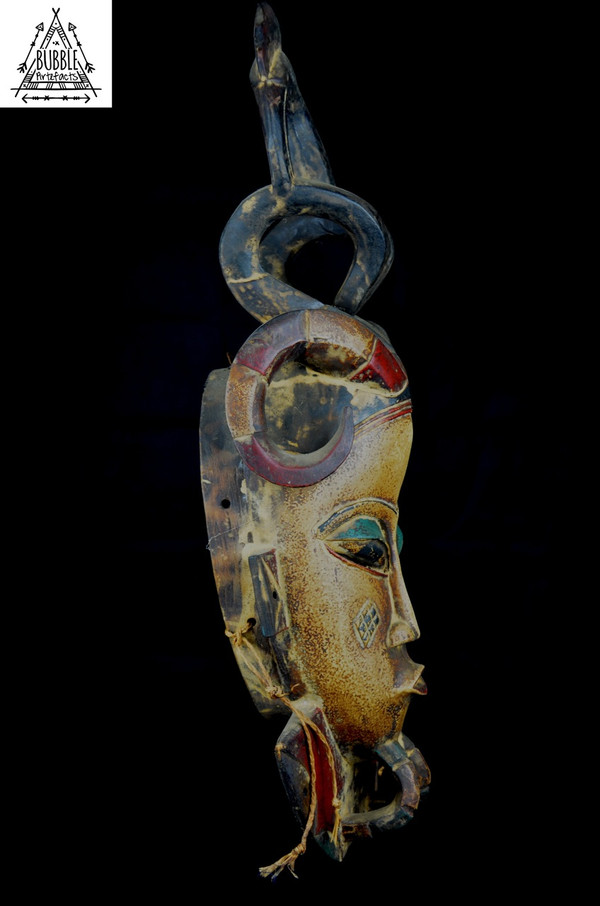 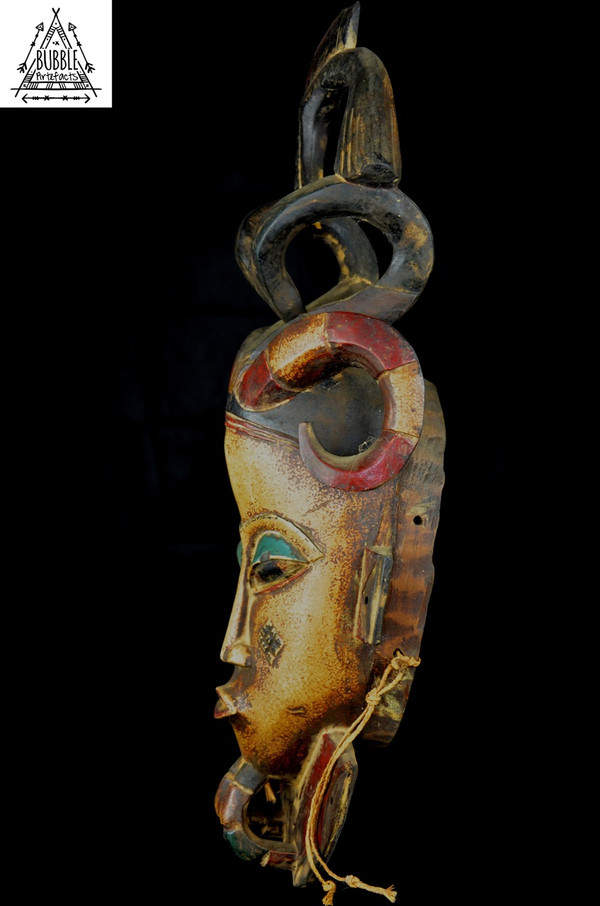 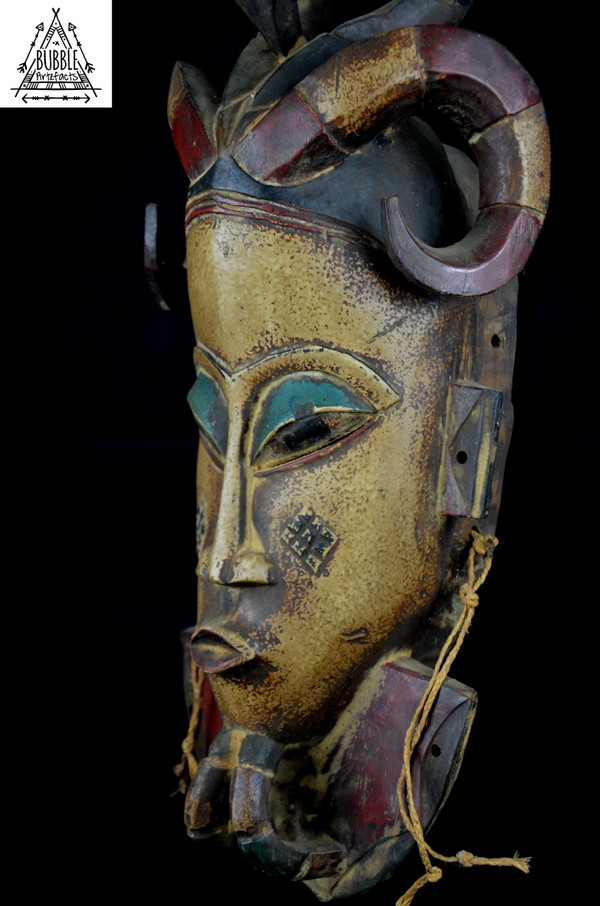 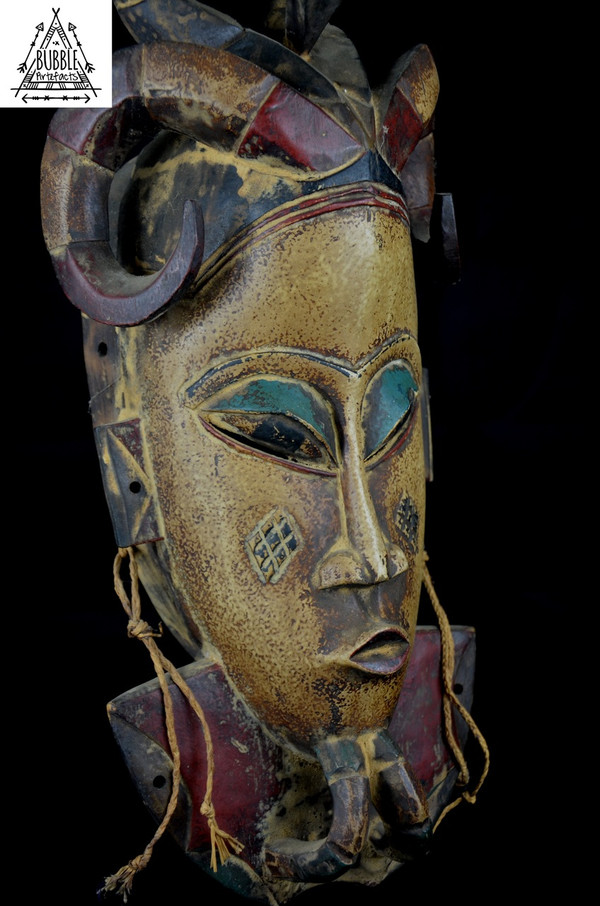 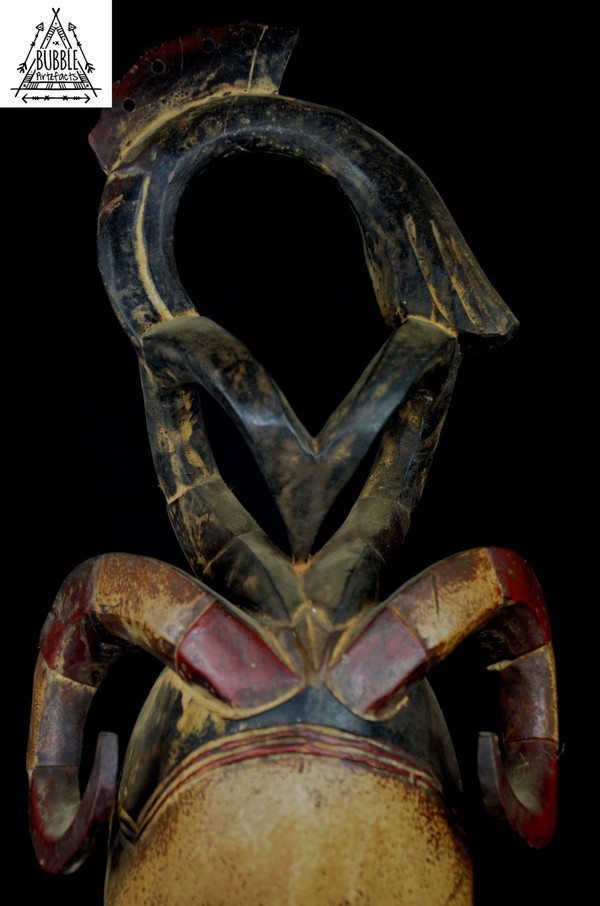 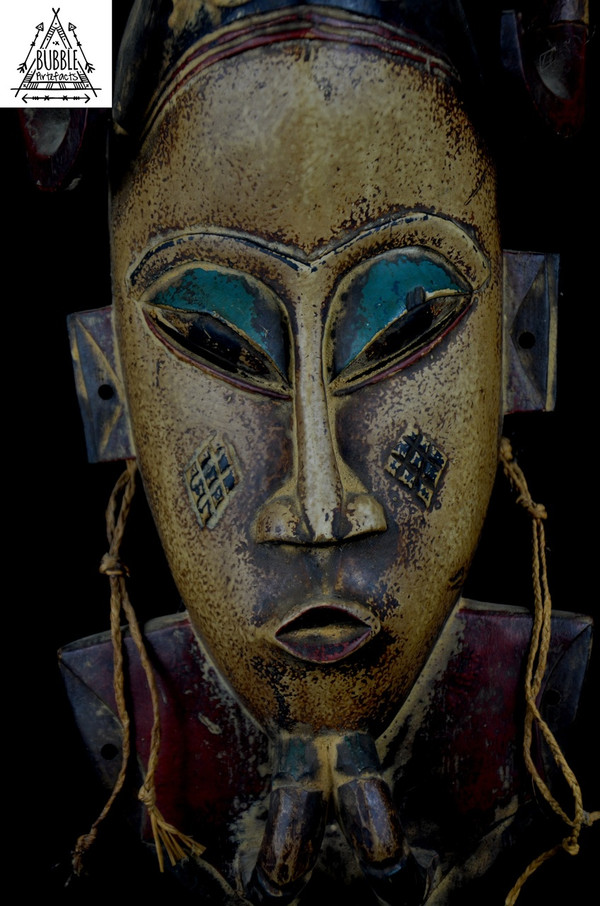 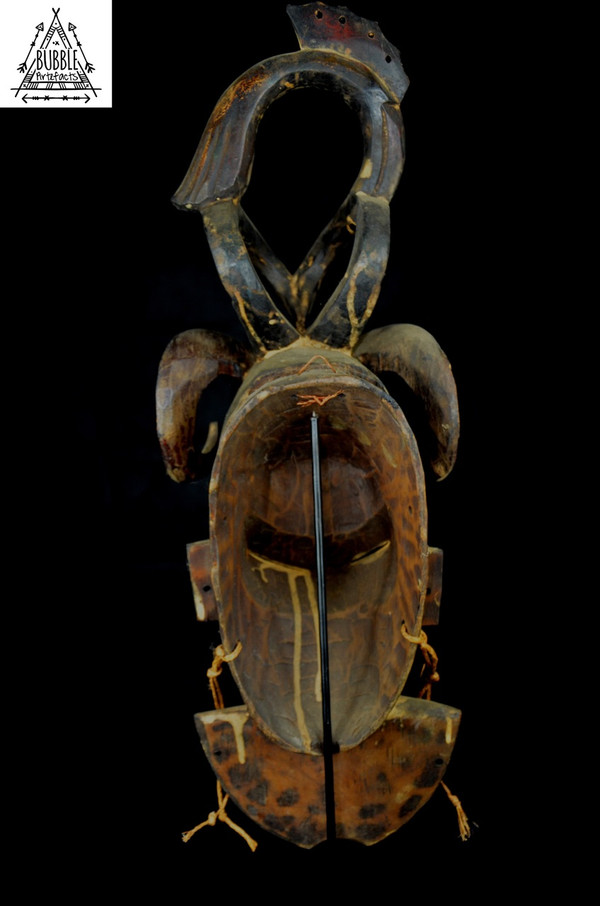 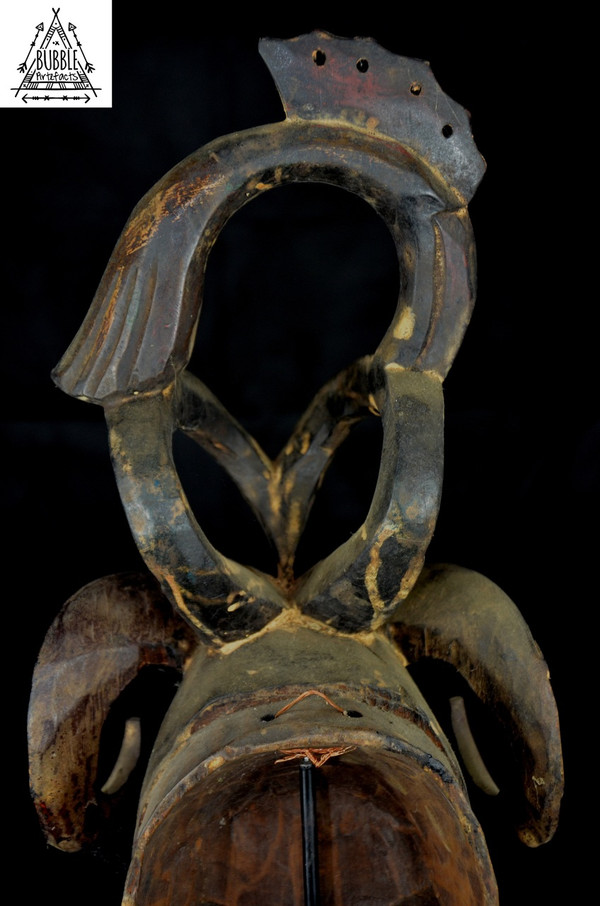 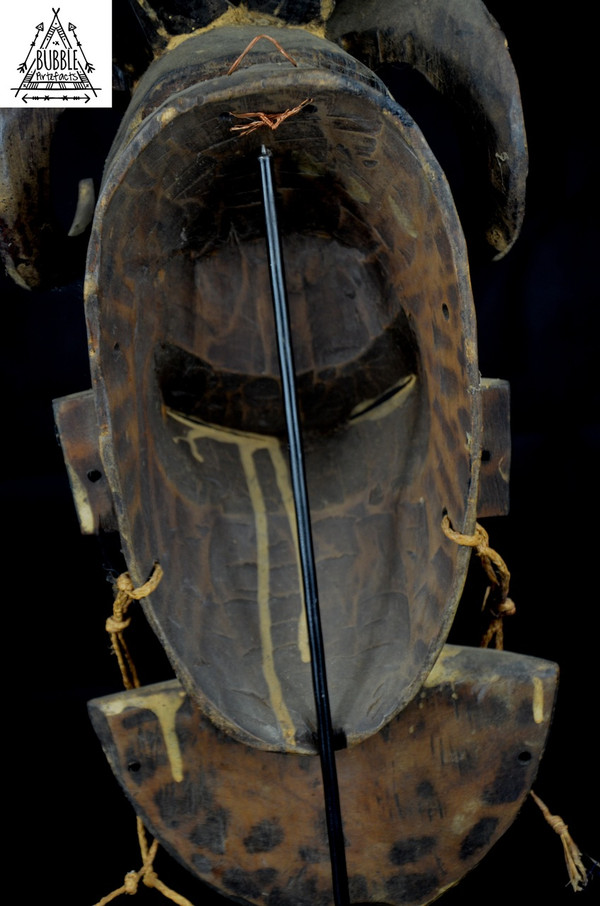